[Editor’s Note: Today’s WCI Network post by The Physician Philosopher discusses the relationship between income, spending, and happiness. YOLO applies both ways—yes, you may die young, but you also may live a long time and you only get one chance to not screw up your finances. The post also reminds me a bit of a quote by Abraham Lincoln – “Most folks are as happy as they make up their minds to be”. Lately, I’ve been trying to decide to be more happy. I’ll let you know how it works. Until then, enjoy the post.]

When the mainstream physician audience catches wind of a FIRE (Financial Independence Retire Early) breathing article that points out why most doctors aren’t rich, the teeth come out. People start sippin’ the hatorade and say things like, “Great philosophy on savings until you squirrel away everything and die of cancer at 40 anyway, having enjoyed no worldly offerings”.

Sometimes people love using a blunt instrument. Yet, this person is implying that a high savings rate will inevitably lead to regret when we die young. You only live once, they say!

I agree that there must be a balance between our current happiness and our savings rate (I recommend The 10% Rule as a tool to find that balance). But it isn’t this simple.

The relationship between money and happiness is complicated. And that is exactly what we are going to examine in this post.

Happiness Economics: What Makes Us Happy?

For years, economists believed that humans generally made choices based on their optimal utility. However, as our understanding advanced on how people make choices, it became obvious this simply wasn’t true. From this, the field of happiness economics (or the economics of happiness) was produced.

This explains why people smoke when they know that they shouldn’t, exercise too little, and eat too much. It is not that people don’t see the lack of utility in these things. They simply think the immediate satisfaction or pleasure they will receive is worth the cost. Until it isn’t anymore.

This same mentality explains why people spend too much and save too little for their future. It explains why people buy cars, homes, and designer gadgets that they will later regret. It also explains why 25% of physicians who are 60 years old do not have $1 million in net worth despite earning millions of dollars during their medical careers.

We are often far too short-sighted in our pleasure-seeking ways.

Yet, we are not doomed.

Studies have shown that, upon careful thought and consideration, we can realize what truly brings us long-term sustained satisfaction. Using tools that can help us realize our goals in life, we can make better choices.

We must first realize our propensity towards irrational decisions. Then, we must follow a carefully crafted plan to keep us on track. 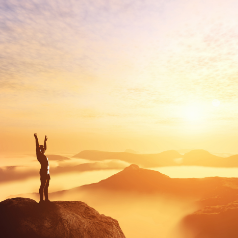 In the 1970’s, Richard Easterlin produced a study showing that while some country’s GDP (i.e. wealth) increased over certain time periods, their levels of happiness did not increase to the same extent as their respective wealth expansion. This produced what is now called the Easterlin paradox, which suggests that happiness does increase with increasing income, but only to an extent.

We have previously discussed the idea that a physician’s income is not directly linked to their happiness. The gist of this discussion is that once your basic needs are taken care of (food, water, shelter, clothing, etc.) any increase in income is likely to be met with proportionally smaller increases in happiness. It is not a linear relationship.

Given the income that most physicians have, we are well above what is required to take care of our basic needs. For this reason, increases in pay for most physicians are unlikely to lead to increasing levels of happiness.

One of the biggest reasons for this is that humans adapt quickly.

While a raise may seem like a great thing for a moment, you will likely be back to your current state of happiness in a matter of weeks or months. If you don’t believe me, reflect back on your transition from being a resident to an attending salary and how quickly your life and expectations adjusted.

The answer to increasing happiness is not usually getting paid more.

If increasing income does not produce happiness, wouldn’t you expect that spending money has a similar relationship (i.e. wouldn’t it follow that more money spent does not equate with increasing happiness)?

The answer here is a bit more nuanced.

Spending money does make us happy. However, there is a catch. We must spend money on the right things.

For example, many of us have experienced what it is like to buy a new house, a new car, or a fancy gadget… just to find out a few months down the road that it didn’t come close to sustaining the happiness that we thought it would.

Again, humans adapt. We get used to the things we accumulate.

If you need proof of this, walk around your house and take inventory of all of the things you have purchased. Think back on how you thought that kitchen table, new TV, or piece of furniture was going to help you live better in that space. Looking back, have you gotten used to it? Or does it still provide the same amount of satisfaction it did when you bought it?

This is why most of the discretionary money that my wife and I spend goes towards tithing at our church, vacations, and meals with friends and family, and on things we are passionate about.  Studies have shown that this kind of spending will maximize our sustained satisfaction and happiness.

Talking about early financial independence and saving money can get some people heated because they feel that we all must be missing out on the “Good Life” while we save our money.

Understand that the relationship between money and happiness is challenging, and spending money doesn’t always make us happy. Our income doesn’t always correlate, either.

Take this time to inventory your spending. Are you wasting money on things that you shouldn’t? Do you become angry when other people mention saving money?

Learn to create an intentional life and to spend money on things that matter. Once you harness these philosophical principles of financial independence, you’ll find the happiness you’ve been looking for. Finding contentment isn’t as hard as you think.

What do you think? Do you spend intentionally? Do you wish that you had a larger income? Would that make you happy? Comment below!

Which Real Estate Side Hustle Is Right for You?